What are the benefits of Creatine?

Creatine is often considered one of the best and safest and is one of the most researched supplements at present. It is present naturally in the human body as well as in various food items and it helps with several wellness goals. Creatine benefits include protecting the overall health of your brain, as well as looking into the overall improvement of body exercise functions and also help to strengthen the bones.

Creatine is extremely safe to consume and is also very inexpensive, which is why most people opt for it. Creatine benefits overall muscle growth and also helps with sustained energy. Having creatine ensures that the ATP or adenosine triphosphate which burns from your body when there is loss of energy, making you lethargic, is not as easily lost. It works as an extra dose of energy minus an uncomfortable caffeinated rush.

Creatine benefits overall strength as well. When working out, you tend to release and lose out on excess of ATP, which unless restored tends to make you extremely lethargic and allows fatigue to set in quickly. However, once you supplement this lost ATP with creatine, not only is your lost energy restored but it also sees an overall boost in your strength.

It also works to improve and boost your cardio performance as well as helps with muscle recovery. When excess fatigue sets in, you tend to feel lethargic and are unable to work out. This can also be because you are injured or are sick or simply because life is keeping you busy. In such times, the body begins to adjust to a different cycle due to which it becomes difficult for it to bounce back.

One of the biggest creatine benefits include its ability to help you bounce back to your former schedule. Although it doesn’t work instantly to restore lost muscle, it does ensure that the entire process goes faster.

Another very important creatine benefit is its ability to act as an anti-depressant. As per studies conducted in universities of Utah and three other universities in South Korea, a mere consumption of around 5 gms of creatine along with your daily/regular dose of anti-depressants helps women to get over their depression twice as faster, in comparison to taking the anti-depressants only. Studies show that most of the nutrients which help to keep the brain healthy also work to ward off mental fatigue. Thus, since mental fatigue is connected with the symptoms of depression, using a supplement of creatine helps to reduce overall triggers that lead to unpleasant depressive bouts. 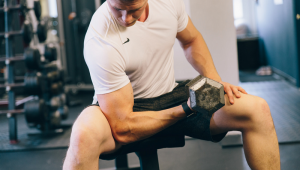 Most importantly, creatine does not harm your body in any way. Although there have been floating rumours of it leading to harming of the kidney and death due to overdose, research has always suggested otherwise. The only side effect experienced (in certain cases), is slight nausea or diarrhea which can easily be overcome by drinking excess water or consuming a little extra food, to get your body accustomed to it.